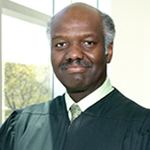 Judge Francis’ distinguished career has spanned over three decades. Judge Francis received his juris doctorate from Rutgers University School of Law-Newark. He was appointed to the bench in 1992 and has sat in all of the divisions in Middlesex County. Prior to his appointment as assignment judge in 2007, Judge Francis was the presiding judge of the Chancery Division. Judge Francis has served on numerous Supreme Court committees, including Civil Practice and Minority Concerns. Judge Francis is an adjunct professor at Rutgers School of Law-Newark. He has volunteered his time to preside over moot court competitions for several schools. He has also been a lecturer for NJICLE and Princeton University. In 2009, Judge Francis was recognized by the New Jersey State Bar Foundation as its Outstanding Volunteer Service Award recipient. Judge Francis recently joined the law firm Riker Danzig as Of Counsel. He is a member of their Alternative Dispute Resolution, Commercial Litigation and Insurance Groups focusing on complex discovery issues, general equity, complex commercial litigation, complex construction litigation, internal corporate and municipal investigations, and insurance coverage.